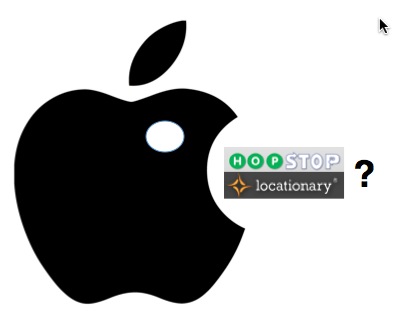 Apple’s acquisitions last week of Locationary and HopStop got me wondering which company was next on its hit list. I asked some smart people in Local Search for their predictions and here’s what they had to say, listed in order of who responded first: 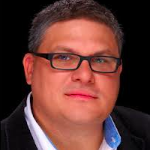 Gib Olander, CEO of Local Viewpoints, a new review service for SMBs:
“Someone in the review space for sure 🙂 They need more descriptive content. Foursquare would be terrific – maybe the best context relevant content on the web. The other big company would be OpenTable. Foursquare has terrific relevancy content. Both Foursquare and OpenTable each are loaded with content and context when people make decisions and where they go next. Things that enable action. It would have to integrate with Siri and the personal assistant idea. A scheduling company? There are a few photo sites / apps that might make sense. Apple thinks its job is to make great products that seem magical. Relevancy is a way for that magic to happen. I don’t think they want to crawl the web to find all the content on the web they are going to look for ways to cheat and have feeds of content brought in. That’s the idea of the Locationary product at least. Foursquare may be too big for them to buy and not core enough, but they have the most interesting data/content in the marketplace today.” 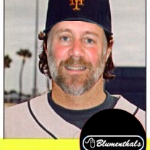 Mike Blumenthal:
“Well the big issues that remain would seem to be geo quality, quick updates (crowdsourcing) and real time updates. They are obviously interested in the latter as expressed by their interest in Waze. But perhaps someone (As Dobson pointed out in September) like TeleNav could satisfy that. As to who can help them with geo quality and geo updates is not clear to me…. given that they don’t seem to like to buy bigger companies like TeleAtlas (which is not that good to start with)”

Mike Boland, VP Content & Sr Analyst of BIA Kelsey:
“(Whatever it is, with) the two mapping related acquisitions this week, they’re building a data backbone in the wake of MapGate. BTW “mapgate” is a misspelled word in iOS I’m now seeing. No OTA update to autocorrect it with Tim Cook’s apology letter.”

Greg Sterling:
“I would think Apple is potentially interested in its own business listings and local data source, notwithstanding the recent Locationary acquisition. I also think that Apple might want to go after someone like INRIX, which provides traffic information. Alternatively I could equally imagine a directions and navigation acquisition, such as Telenav. ”

@localseoguide I was actually thinking they'd have acquired @factual 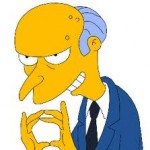 Mr. Burns:
“For future acquisitions, my guess is tuck-in stuff, not something spectacular like Yelp or 4sq.”

Deep Throat:
“Telenav comes to mind. And I’d look at all of the apps that Apple promoted in the App Store when they had the fiasco maps launch. Hopper is an interesting startup they might look at but probably too early. Foursquare is still too expensive. Pretty sure Apple will want a buy that gives them a combination of data and tech/talent. There aren’t many options. Other than niche plays like Hopstop.”

Deeper Than Deep, Deep Throat:
“Locationary, theoretically satisfied merge/purge ETL issue and HopStop gets them into transit data, although they still have a long way to go. I wouldn’t be surprised if they did something in the LiDAR area as it relates to imagery. Google has been using this technology for years to map points in space and do things like extract images and text and match it up with their precise locations. There’s a lot of amazing data you can get from this that can inform what you show for various map queries. For example, knowing where a one-way sign is a located. That said, Apple’s thing is to leap-frog, so what could they do that’s different from Google Maps? Maybe tying it to commerce via Passbook? Google already does something like this with Google Offers and Google Wallet, but I don’t think that it has gotten significant traction, so perhaps a big local commerce play. Then again, just improving “Report a Problem” feature would be a big step.”

Perry Evans, CEO of Closely
“The most logical moves, in my opinion, are on data layering “on top” of base mapping. For base mapping, controlling the work of TomTom would be the obvious move, since they now know what they have and how it’s working/not working. There’s no silver bullet in base mapping and navigation.

For layered data, I’d look to acquire Factual or Urban Airship – to bolster the ability to add and leverage social-local content for data and ad infrastructure. Beyond that, I’ve always felt Yelp was the logical buy, but they seem to be acting pretty independently, and I suspect Apple has already tried that plan.

A couple of wildcards – recce.at or maybe a player in interior mapping tech. I’d look to the leading tech for taking a position in photo processing for 3-D and interior pics. I love cycloramic – great simple tool, very interesting low tech approach for recording interior 3-ds.”

Neuman
“There is an early stage company in the bay area called Alohar. It should probably be bought by Apple and the opportunity could be right. They have a very interesting SDK that captures a ton of realtime location data from within apps on the mobile devices. If you want to chat with them as well I can connect you. They are down in Palo Alto. The CEO was former Google and handled location services for the Apple relationship early on and then more mainline location services for Google before leaving 2-3 years ago.” 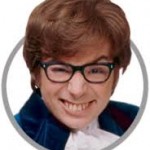 Austin Powers
“Apple has plenty of business data coming through multiple sources but technology cannot cleanse all of it. Apple will likely need some small set up with expertise in local specific business listings. My guess is that they may end up scooping a data setup like wCities or Urban Spoon.”

As I mulled over the various responses, it got me thinking about Apple’s strategy for maps. As Horace Dediu would ask:

“What is the job Apple Maps is hired to do?”

There are many, like Matt Yglesias, who would argue persuasively that Apple Maps’ job is to prod Google to keep improving the Google Maps iOS app which helps keep iPhone users happy. That may be its entry-level job, but I think in the long-run its real job is to be a well-functioning mobile mapping app that is also the premiere platform to showcase innovative location-based apps.

Apple doesn’t need to buy consumer recommendation services like Foursquare or Yelp – as one exec put it, “Apple would never buy Yelp because do you think they ever want to see a pissed off SMB with a one-star rating going postal at the Genius Bar?”

I don’t think they need to buy “closing the loop” services like OpenTable either. A big difference between Apple & Google, is that Apple doesn’t need/seem to want to make money off of their maps. They just need the maps to work well and to be integrated into any app that wants to work with them, like they currently do with Yelp. I wouldn’t be surprised if the launch of iOS 7 or the next iPhone includes an announcement that there are a lot more content data providers that will appear in Apple Maps.  The ideal Apple Maps app may be one that is aware of the apps you have installed on your device and shows those apps’ data on the maps when you make relevant queries, and puts their POIs (Points of Interest) in the right place.

So what does Apple Maps really need to do the job that it has been hired to do?

1. A Crowdsourcing Company:
Although Mike Dobson clearly thinks Waze was not worth $1B, Google’s MapMaker + Waze equals two great ways for people (and bots) to contribute to mapping data which can help with data cleanup and create new UGC mapping experiences. While Waze probably did not have a significant enough global footprint to make a huge difference, the combination of Apple’s reach plus Waze’s expertise might have been a game changer for the weak “Report a Problem” feature. That said, my guess is that Apple doesn’t need this kind of technology as much as they need people who understand the problem. So I am putting my money on a company like Primordial, makers of Ooze (a crowdsourcing platform for what looks like Black Ops). Would make for great headlines – “Apple Maps Ooze…”

2. A LiDAR Company
Apple needs it’s own version of StreetView. This seems a big scale effort that can’t be solved by any old start-up with a tricked out car (or maybe it can).  While I imagine they could pay some smart company a lot of $ to make this happen, I think they are going to want to own this data. So they probably need some kind of LiDAR company. I don’t know jack about LiDAR, but as with most things, here’s a good place to start.

3. More Smart People Who Understand This Stuff
The world of mapping aka “geospatial data” is bewilderingly complex. I have been operating around it for ten years now and I barely understand the issues. I think Deep Throat was right on the money with “a combination of data and tech/talent”. My bet is that it has been the lack of product and engineering people with a long history in this field that has been the biggest obstacle to getting Apple Maps off the ground.

11 replies on “Who Will Apple Maps Buy Next?”