In September, I noticed that Apple Maps had finally updated its data supplier info when it released iOS8. But as one of the few people on the planet actually keeping track of this stuff, there still were a lot of questions about which data was getting regularly updated and which was not:

Today when I checked the Apple Maps Acknowledgements page I noticed the following new info:

The big news, for me at least, is that this confirms that Open Street Map data is still being used by Apple Maps. So if you are having mapping data issues (e.g. your street doesn’t show up on Apple Maps) then fixing them on Open Street Map is still worth doing.

Here’s what else has changed on the page:

About two weeks ago when Apple launched Apple Maps Connect, I claimed Local SEO Guide, Inc.’s listing which is officially located at my residence.  We also have an office in downtown Pleasanton. After eleven days of my listings status being “Reviewing”, I received the following in an email: 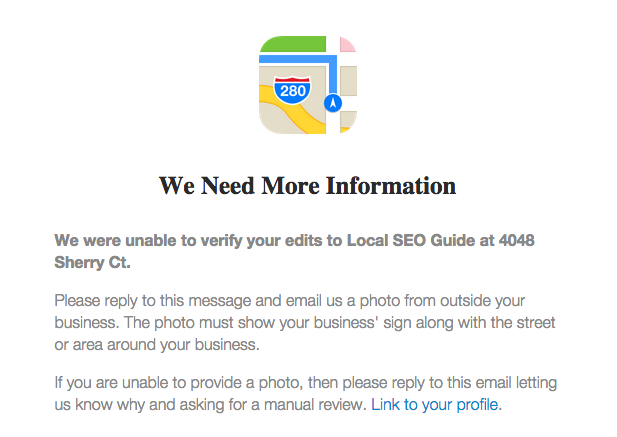 As I said about a year ago, “Apple Maps has actively tried to keep businesses located in residential areas out of the maps”.

So if you are doing business out of your house and don’t have a sign I think you have two options if you want to stay listed in Apple Maps:

1. If you are already listed in Apple Maps (like LSG is) don’t try to claim your listing
2. Find a designer who’s good at photoshop

Looks like a similar notification was shared on Linda Buquet’s Local Search Forum.

Jim Froling of 949Local asked if an agency should put all of its clients under a single Apple ID or set up a unique Apple ID for each one. A good question as Apple Maps Connect has instantly become a critical part of every local marketer’s to-do list.  While the real answer is “who knows?”, my theory of the moment is you should set up a unique ID for each client. Here’s why:

I imagine there are going to be a lot of bumps in the road for agencies as this service grows. IMO the best policy at the moment is to try to anticipate how this system could screw you down the road and take the path that seems most likely to avoid the screw.

UPDATE 10/23/14: As you can see, their bulk listing process may not be up and running just yet. I would still submit just to get in the queue. 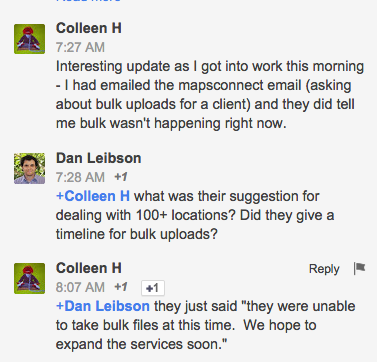 As far as I know there’s no specific format for the file, but I doubt you can go wrong with a csv that includes all of the fields you can submit as an individual business:

Place Status (i.e. is the business open or closed down)

Categories (you can select 3 top level categories and a sub-category for each such as Pets > Animal Shelters. You can also suggest categories. Phil Rozek has put together a category list in a Google Doc.)

Today a retailer client, let’s assume they are called “Bingo’s”, pinged me because they had sold one of their locations, let’s say to “Bozo’s”, and their brand was still appearing on the business’ Yelp profile. So when you searched “bingo pleasanton ca” in Google the Bingo’s Pleasanton Yelp profile showed up as the top result. The problem was that Bozo’s had created a Bozo’s Pleasanton Yelp profile but Bingo’s had never shut down or changed the name of the old Yelp profile. And this was happening across all of their local listings on various sites such as YP.com, MerchantCircle, etc.

The Google solution was pretty simple – we used Yext Powerlistings to instantly change the names on all of the Bingo’s Pleasanton profiles in Yext’s network and we updated their Google My Business page and the information at the main data aggregators. In some cases this involved closing down the Bingo’s listing at the data aggregators. Most SEOs would stop there and think that their work was done. Wrong.

A quick search for “Bingo’s Pleasanton” on Apple Maps revealed that there was both a Bingo’s Pleasanton listing and a Bozo’s Pleasanton listing. Even though we had fixed the issue at the data aggregator level which in theory would find its way eventually to Apple Maps, that still doesn’t mean that it would get fixed in Apple Maps. So we used the “Report a Problem” feature and marked the business information as “incorrect” and submitted the name change to the Bingo’s listing. Alternatively, we could have marked the location as closed, but I wanted to see if Apple Maps could figure out to merge the two listings based on the name change. We’ll see.

The moral of the story is that because Apple Maps data does not show up in Google, marketers are likely to forget about it when doing big things like changing brand names, changing addresses, etc. Apple Maps is one of the most used local search services on the planet. Ignore it at your business’ peril.

Apple Maps updating system appears to be getting faster. As I mentioned a few weeks ago, we have started to see more submitted updates go live. And I just noticed one case I had been watching for two years where a business’ map pin was displayed across the street from its actual location is now correctly located. So six days ago, when I noticed the Apple Maps pin for my company, Local SEO Guide, Inc., was about 50 feet off base, I used the Report a Problem tool to move the pin and voila, today it’s now in the right place. 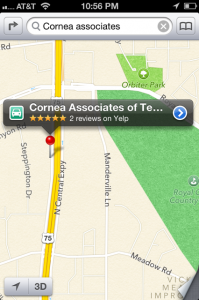 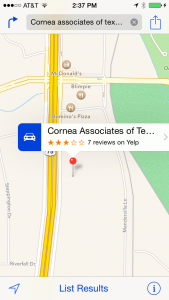 And if you’re interested in more Apple Maps updating news, according to this Reddit thread, for the past couple of months Apple Maps has been making daily updates at 3:00am Eastern Standard Time. 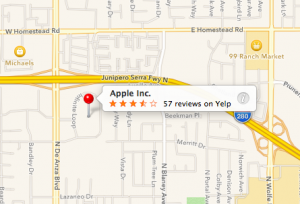 With the launch of iOS8, Apple has finally updated its list of data suppliers on its “attribution” page:

Hexagon
“A leading provider of design, measurement and visualizations technologies.” I am presuming they are providing some whiz-bang new stuff in the updated Apple Maps.

Kingwaytek Technology Co., Ltd.
“The only map provider in Taiwan that concentrates on producing digital maps at present.” I am guessing Apple Maps Taiwan just got a lot better. If you need to fix a Taiwanese listing, I am thinking this is where to look.

So no new sources of U.S., European or South American data. There are still a lot of countries that don’t have business listings. 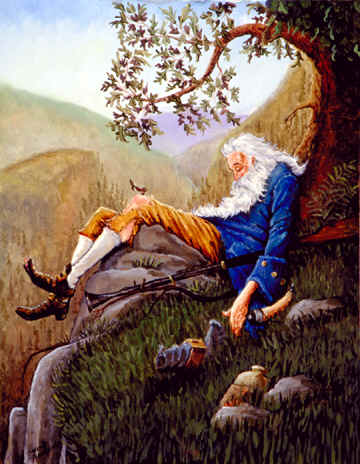 On September 25th, 2013 I was contacted by the owner of DC 9 Nightclub about getting the business listed on Apple Maps. After doing a quick review, it seemed like a fairly straightforward issue. DC 9 was not listed in a number of the key business data suppliers to Apple Maps like Neustar Localeze and Acxiom and their business name and phone number was incorrect on Factual. Within 24 hours we had fixed all of these problems and reported the missing listing to Apple Maps via its “Report a Problem” feature. And that’s when we found that when it comes to Apple Maps, nothing is ever straightforward…

Often when we fix Apple Maps issues we can see it take effect relatively quickly (60-90 days is what I usually tell clients but we’ve seen faster, and slower of course). But after 60 days the business still wasn’t listed and the Factual data had not updated. I figured this was the issue. Because of the way Factual works, it wasn’t enough to update the data at Factual (where I have a “power” account), we had to fix citations that Factual relies on to triangulate the data. So we did a citation clean-up which took about three months for Factual to acknowledge and update. But still DC 9 was nowhere to be found on Apple Maps.

It was then I realized that I had neglected to take into account the “geo-spatial data”, or whatever the map geeks call it, that Apple uses to create the maps. This data is stuff like streets and buildings and lat/longs, etc. that businesses get mapped to. So I popped DC 9’s address into TomTom/Tele Atlas, one of the underlying mapping data providers, and lo and behold, DC 9’s address of 1940 9th St NW Washington, DC 20001 did not exist in these systems. And when you just searched the address in Apple Maps, the pin showed up at 1938 9th St NW, the building next door, which had originally been part of 1940 until the building was split in two, which probably is why these mapping systems couldn’t figure things out. So even though we had fixed the citation issues, there was nowhere to put the business on the map.

So I went over to TomTom and Tele Atlas‘ sites and submitted edits to their maps to add the address. Within one week the edits had been approved and then I waited…til yesterday.

So if you are trying to add your business to Apple Maps, make sure you’ve got at least five months of patience, but be prepared to wait a year.

From the recently released 4GEE Mobile Living Index which analyzes mobile data use and 4G trends on the EE Network (a British carrier) in the U.K. since 2013:

Traffic on the new Apple Maps now represents 70% of mapping traffic on the 4G network, from 60% in the second half of 2013, taking market share from Google maps, which is down 7ppts. This difference is even more marked over 3G where Apple Maps is up 19ppts and Google Maps is down 15ppts.

EE may push iPhones over Androids so this doesn’t necessarily mean this data applies to all carriers across the board, but every day Apple Maps is getting better and every day thousands of people get a new phone with Apple Maps pre-installed. Apple Maps is for real. You might want to pay attention to it.

Greg Sterling posted today about Apple Maps’ “new” expanded list of data providers which you can find at http://gspa21.ls.apple.com/html/attribution.html. Unbeknownst to Greg is that this list was updated sometime around the launch of iOS7 in the latter part of 2013. Here’s a November 2013 snapshot from the Web Archive.

It’s not surprising that Greg was not aware of this. It’s an obscure page after all that only the few geeks interested in Apple Maps pay attention to. But what is surprising, as I said in the comments on Greg’s post, is: