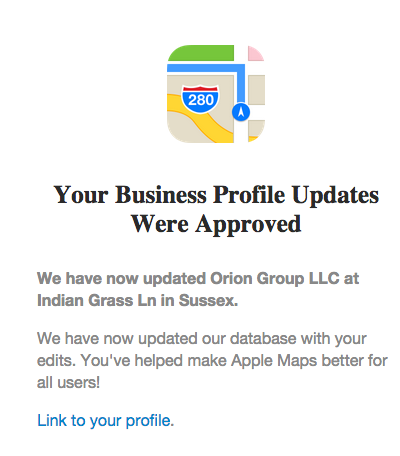 When Apple Maps Connect launched a few months ago allowing U.S. businesses to claim and update their listings, one of the rules was that your business could not use a forwarded phone number. We got a number of reports that if you submitted a forwarding number, Apple would reject it. Now we have some new info that perhaps Apple is changing its mind?

Russ Offord, a Milwaukee Web Designer, emailed me a week ago saying that he had submittted a new listing for Orion Group and it was rejected because it used a forwarding number. In this case, the forwarded number had been created because of a moved location and regulations about 911 calls. According to Russ:

We moved our office location years ago from one city to another and wanted to keep the same phone number. Apparently, due to regulations for 911 purposes, we are forced to have our primary number (at the telco level) use a number with a local ‘exchange’. So what the phone company did was to change our old number to be a ‘Remote Call Forward’ number that forwards seamlessly to our new location’s number.

When he originally submitted the listing with the forwarded old number, he got the following message from Apple:

And the business’ profile on Apple Maps Connect was marked as “Waiting for Review”.

Then yesterday Russ accidentally re-edited the data on the listing and submitted it…and the listing got approved.

Hopefully this wasn’t a glitch and thanks to this post Orion will now get rolled back. I am thinking this was approved because because of the specifics of this case whereas a standard business with forwarding numbers will not get approved.

Has anyone else been able to get forwarded numbers approved?

One reply on “Has Apple Maps Connect Gone Backwards on Forwarded Numbers?”