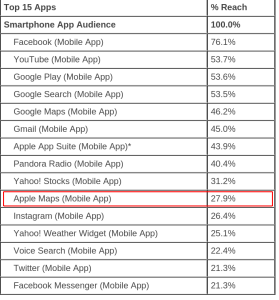 Comscore has released its July 2013 U.S. Smartphone Subscriber Market Share report.  According to Comscore Apple Maps is now the 10th most popular mobile app in the U.S. and is reaching about 28% of all smartphone users.  With Apple releasing its new iPhone(s?) later this month and OS Mavericks, its new desktop operating system which comes with Apple Maps baked in, in October, I wouldn’t be surprised if that number hits around 40% by January.  Apple Maps is for real and it will keep on getting realer.  Time to figure it out for your business, no?

Greg Sterling has more detail on the Comscore report.