Mike Blumenthal just pinged me about a survey about consumer interest in the iPhone5 AppleInsider published today.  According to the survey: 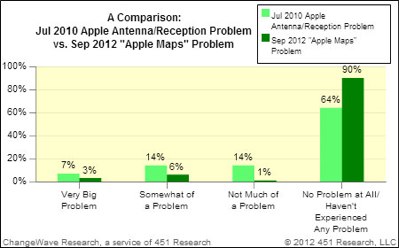 “Despite the media attention surrounding both the Apple Maps issue and the Apple Lightning port issue, neither has had an impact on the massive numbers of buyers queuing up to buy the iPhone 5,” said Dr. Paul Carton, ChangeWave’s vice president of Research. “Rather, the survey results show both issues hardly rank as bumps in the road.

ChangeWave also asked respondents running iOS 6 if they had experienced problems with Apple Maps, and the survey found that the new mapping software has not been a major issue for users. Among those polled, 90 percent reported “no problem at all,” while 3 percent said iOS 6 Maps are a “very big problem,” while 6 percent said the issue is “somewhat of a problem.”

The data shows that any perceived issues with iOS 6 Maps are less of a concern than the “antenna-gate” controversy with the iPhone 4.”

The 90% no problem number matches up well with Mike’s Google Survey which showed that 91% of iOS 6 Users didn’t have a problem with Apple Maps and were not going to jump off the Empire State Building.  For that extra 1%, it’s going to be a long way down.