UPDATED: I have received confirmation from people who would know that Acxiom data is in fact being supplied to Apple Maps for Canadian business listings.  I have updated the title of this post accordingly.  Hopefully they will inform their customer service people 🙂  Sorry for the confusion.  The post below should now be treated as mere entertainment.

Last week I published a list of the Apple Maps Business Listings Suppliers by Country.  I should have qualified that post as very much a work-in-progress.  I put together the list based on the data providers noted here and then researched which countries each vendor serves.  I have also reached out to each supplier to confirm my assumptions, but thus far none have gone on the record – some have refused while others have agreed to talk, but I have yet to follow up.  It’s likely that those I do speak with won’t say much anyhow.  Apple partners are justifiably tight-lipped about their relationships with Cupertino.

In the case of Acxiom, I suspected that they were supplying Canadian data as they do offer Canadian business listings and I had seen some speculation from some Canadian SEOs that Acxiom was being used there.  I asked Acxiom to confirm this, but they did not want to go on the record.  Of course, I could have just picked up the phone, called Acxiom customer service and asked like Dale Butterfield: 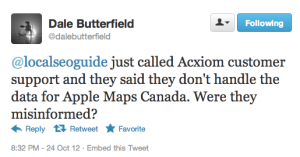 Note: This doesn’t necessarily mean that Acxiom is not being used in Apple Maps in Canada.  It may just mean they haven’t told their customer service department.